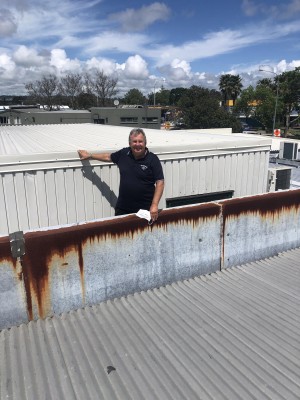 Being careless at height can have very real consequences. Ian McDermond remembers a worker nearly falling through a roof a few years ago because he was talking on his cellphone and not concentrating.

“He just wouldn’t leave his phone in the truck,” recalls Ian. “He was on a call and walking towards a skylight... He would have walked right through it if one of the other guys didn’t chase after him and grab him.”

In this case, the consequences fortunately didn’t involve a fall. However, the worker did lose his job. Ian, who’s the owner and director of McDermond Plumbing in Auckland, says you just have to take safety seriously, and there’s no room for people who don’t.

Data from the Ministry of Business, Innovation and Employment (MBIE) shows that more than half of all falls are from less than three metres. Around 70 percent are from ladders and roofs, adding up to an estimated cost of $24 million a year. Not to mention the human cost that can result from a fall.

“It’s like being the conductor of an orchestra. Every member of that team has a job, and they know they need to do their job well.” ~ Ian McDermond,
McDermond Plumbing, Auckland

Ian reckons roofing accounts for around 30 percent of the work his business does. That includes full replacements, restorations, repairs, gutters, flashings, penetrations and rubber roofing.

He’s been running his own company for more than 30 years, and in that time the safety standards around working at height have become much stricter. His staff learn specific skills for working at height through Vertical Horizonz and Site Safe.

Even one metre falls can hurt
When the 1992 Health and Safety in Employment Act was updated to become the Health and Safety at Work Act in 2016, it came with a range of measures that directly affected those working at height. Among other things, it requires workers to take steps to prevent harm whenever there’s a risk of falling. Failure to do so can result in up to two years in prison, or a fine of up to $500,000.

The requirements apply at any height. WorkSafe says there’s a mistaken belief that no controls are needed when you’re working below three metres. Ian says even falling from a metre can hurt, so it’s worth being careful.

The WorkSafe-prescribed process for dealing with the risks of height is Eliminate, Isolate, Minimise. The best option is to eliminate the risk, the second-best is to isolate it so it can be avoided—and if that’s not possible then the risk should be minimised as much as it can be. Ian says it’s not uncommon to do all three things on one job.

“You might have to move cars from below a site so things can’t fall on them—that’s eliminated. You might install a safe walkway so people can walk around without things falling onto them—that’s isolated. Then you use scaffolding or guardrails to minimise the chance of someone falling off the roof.”

Having a plan is a must
These types of measures all depend on the nature of each job. Ian says having a health and safety plan for each job is an absolute must in order to deal with the specific circumstances you’re presented with. Having one lead person on the job also makes a big difference, he believes.

“It’s like being the conductor of an orchestra. Every member of that team has a job, and they know they need to do their job well. Having one person in charge makes it easier for everyone to understand what the procedure is and how they’re going to contribute to get the job done.”

“People either like it or they don’t, you can tell when they’re three rungs up a ladder if they do or not. The highest risk is when they’re going from the top of the ladder to the roof. But training someone and educating them about height teaches them the things they need to do. Look before you walk, never step backwards... things like that you pick up naturally with time.

“You start making mistakes when you’re not prepared—if you don’t follow instructions or pay attention. Even something basic like not bringing enough screws onto the roof at the start. You have to go down and up again, and that’s risky. Having the right tools for the job from the beginning helps to minimise the risk.”