Twenty-one years into his career, Kenny Geenty has earned a top plumbing award for his attitude and work ethic. 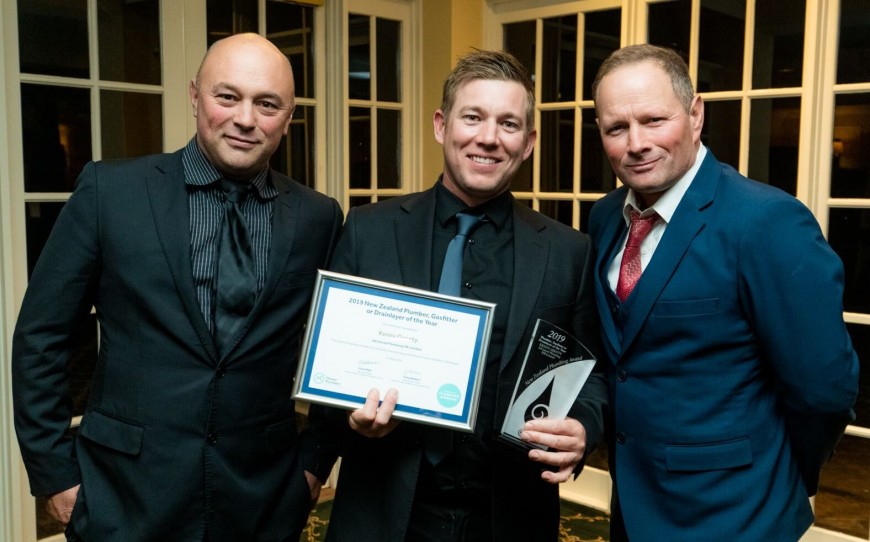 There’s clearly great respect between foreman Kenny Geenty and his bosses Mark Watkins and Bevan Gully at Advanced Plumbing Hawke’s Bay. There’s also great friendship — and even shared holidays. “Bevan, his wife Andrea, myself and my partner Jontelle all went to Surfers Paradise for a couple of days after the NZ Plumbing Awards in May,” Kenny says.

They had plenty to celebrate, with Kenny winning the NZ Plumber, Gasfitter or Drainlayer of the Year Award at the event, held at Australia’s Sanctuary Cove. Although earning the title had been a longtime dream, he says it still came as a complete surprise on the night. “Hearing my name, then walking up in front of 300 people was just so surreal.”

Although Kenny’s work on high-end projects, such as Xero founder Rod Drury’s Havelock North house, speaks for itself, Mark had some strong words of praise to add in nominating Kenny for the award. “Kenny’s not only good at his job, he’s also an effective leader,” he wrote. “He’s known for going out of his way to better his apprentices — whether that be coming in early to go over ideas, or simply involving them in every stage of a job so everything done is known and understood.”

Kenny works hard at passing his knowledge onto the next generation, taking an apprentice with him wherever he goes. “It’s really important to do that,” he says. “I’ve had at least 10 apprentices with me since I was an apprentice myself in Napier, back in 1998. And they’ll hand on the knowledge again themselves. That’s how it goes.”

Above: Kenny puts the finishing touches to a double fire install.

Kenny recommends plumbing to anyone thinking about taking it up as a career, provided they’ve got a keen attitude and don’t mind sometimes getting their hands dirty. “Look, plumbing certainly comes with its challenges,” he says, “but that’s what makes it so enjoyable—when it all comes together, and everything works. When you’ve figured it out.”

Everyone puts in the hard yards at Advanced Plumbing Hawke’s Bay, and Kenny is no exception. “I run various jobs at the same time, bringing people in as I need them, three or four on each project,” he says. “I’m always everywhere at once.”

His current challenge is a large 100-year-old homestead in Havelock North. “It’s been completely gutted,” he says, “but all the interior walls are concrete. We’re designing the plumbing system for the five upstairs bathrooms and one downstairs.” 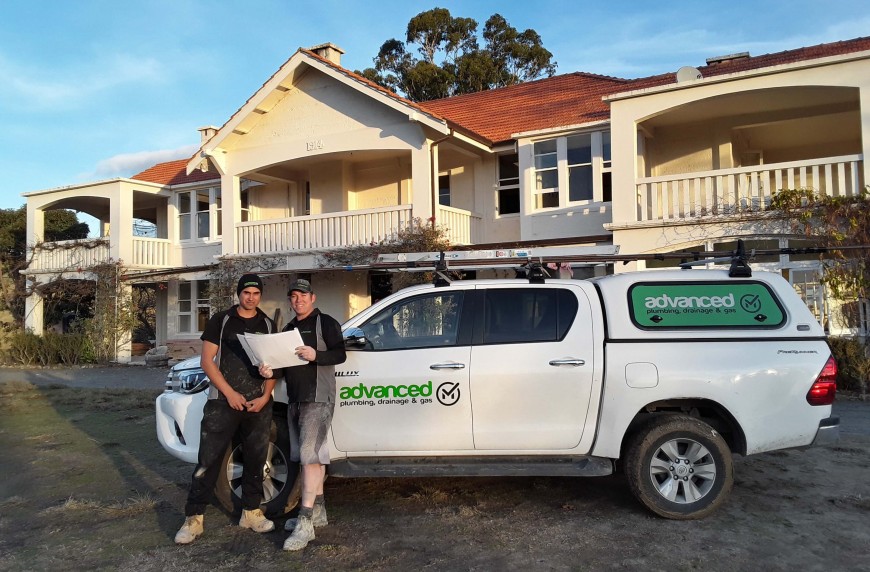 Above: Kenny Geenty with apprentice Hayden going over the plans for the Kopanga homestead renovation.

This particular house doesn’t have a fireplace, but Kenny says he also does many complex and complicated fireplace installs all over Hawke’s Bay.

Although every job involves a slightly different approach, he always does one thing the same. “It all comes down to building relationships with the clients and awesome builders we work for on a daily basis. We keep the communication going all the way through, so they’re informed at every stage and know exactly what’s happening,” he says. “The people I work with always know that they can give me a call at any time.”

This blog has been adapted from an article by Geena Tuffery in NZ Plumber magazine, Aug/Sep 2019 issue.