Not afraid of hard work and always up for a fresh challenge, Te Tane McGuire is the kind of team member every plumbing boss hopes for — and it’s made him a top award winner.

Newly qualified plumber Te Tane McGuire credits his parents for instilling a good work ethic in him. “My parents have always been hard workers and my father pulled very long hours in the logging industry, so I learned from them,” says the 26-year-old. 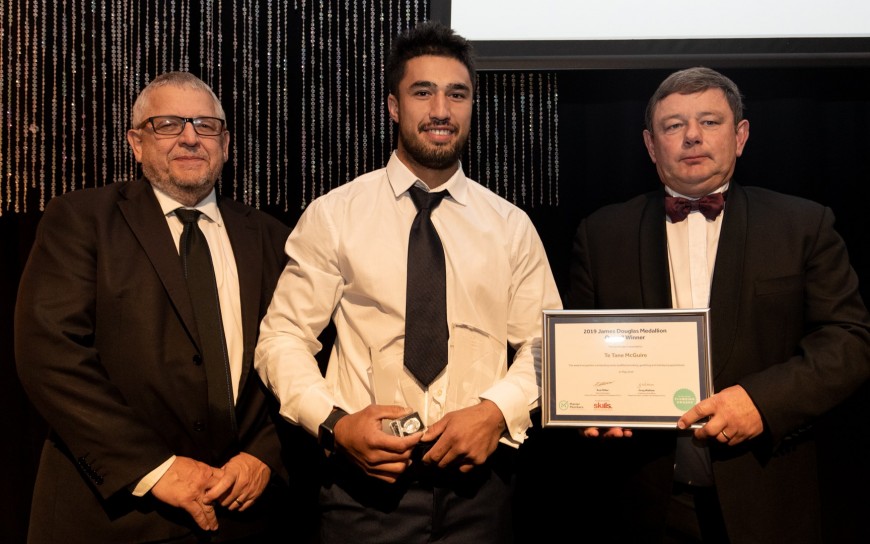 Above: Te Tane McGuire being presented with the James Douglas Medallion award by Skills CEO Garry Fissenden (left) and Master Plumbers Chairman Craig Foley at the 2019 New Zealand Plumbing Awards in May.

In just four years in the industry, Tane has been exposed to a huge variety of work in challenging industry sectors at his Napier workplace, Tech Mechanical Services. Company General Manager Brad Ellison explains that this has included involvement with complex water environmental solutions for stormwater on high hazard sites and installing anti-ligature solutions — which he helped design — to correctional facility cells.

“He’s also done winery works, including compressed air and glycol reticulation, along with the controls operating the systems, and gas reticulation of high volume uses for industrial firms,” says Brad. “Despite high pressure deadlines, health and safety risks, environmental standards and quality expectations, Tane takes it all in his stride.”

In fact, the challenge and variety of these commercial projects give Tane a real buzz. “I like the skills required in large-scale projects because it’s not ‘copy and paste’ work; it allows me to do something different and I’m never bored. I learn quickly, so it’s good to be thinking all the time.”

Tane says he works hard because he likes people to be happy with the results and that drives him to improve all the time. “It’s an honour to do a job well. A lot of plumbing is hidden, but I take pride in perfection, especially when the final product is visible. Workmanship is a top priority; everything must be level and left clean, tidy and polished — just the way I would want it to be in my own home.”

His positive attitude is reflected in his studies too. After completing his plumbing and gasfitting apprenticeship last year, Tane easily gained over 80 percent pass marks in his Tradesman and Certifying registration exams for each trade. He is now undertaking a drainlaying apprenticeship in order to achieve his next goal of becoming certified in all three sectors.

Tane thinks it’s important that apprentices are supported on their study journey and appreciates the support Masterlink gave him throughout his four-year plumbing and gasfitting apprenticeship and now with his drainlaying apprenticeship.

“Masterlink have been awesome,” he says. “Bob McCoy, the Masterlink Lower North Island Manager looks after me and visits several times per year. He tells me what I need to work on so that helps me to constantly improve.”

Tane is keen to inspire a new generation of apprentices and has taken on a mentoring role himself. “I teach them my way of doing things, but also I let them explore their own way of doing things — as long as the job is done right. I may get a few grey hairs along the way, but it’s awesome to see the apprentices learn and grow over time!”

Tane’s drive, self-discipline and dedication to continued development led his employer to nominate him for the James Douglas Medallion award, presented for more than 70 years to a top nationwide newly qualified apprentice.

“Over the last 23 years in our industry I have encountered several exceptional plumbers, but none have impressed me like Tane,” says Brad. “He is what every employer dreams of.”

Tane was selected as the Plumbing Finalist and overall James Douglas Medallion award winner and was at the 2019 New Zealand Plumbing Awards Dinner in Queensland on 31 May to receive his medallion. Tane also wins a $500 cash prize, together with a $2,500 Career Development Scholarship from The Skills Organisation.

James Sandilands Douglas was born in Dunedin in 1872. He began his plumbing apprenticeship in 1888 and six years later, aged 22, became an employer, having jointly purchased the business with the foreman when the boss retired.

A founding member of the Otago Master Plumbers Association, he became Association President in 1905-6 and again in 1910, staying in the role for an incredible 23 years.

During his long and illustrious career, he also served as Chairman of the Dunedin Drainage Board and as Mayor of Dunedin, amongst many other appointments.

James Douglas was made a Life Member of the national Master Plumbers in 1953 and died at the age of 85 in 1957.

The James Douglas Medallion has been presented since 1948 in his honour.

This blog has been adapted from an article  by Je t'aime Hayr in NZ Plumber magazine, Jun/Jul 2019 issue.