About » News » Flushed with success

A new ‘flushability’ standard will make it easier for consumers to see what they can (and can’t) flush down the loo. 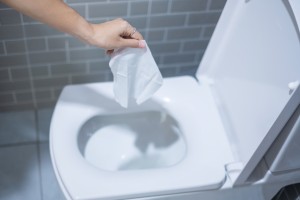 It costs Aotearoa New Zealand at least $16 million each year to unblock pipes caused by wipes and other non-flushables, according to Water New Zealand.

Auckland’s Watercare, for example, says it spends $5.5 million each year cleaning up wastewater overflows caused by wet wipe blockages that have built up into fatbergs.

And we’re not alone. Utilities in the UK put the annual cost of clearing blockages, mainly from wet wipes, at a staggering £100 million. A couple of years back, a 40-tonne fatberg the size of a doubledecker bus was cleared from a London sewer—wipes, nappies, fat, grease and all.

So, it’s not surprising that New Zealand and Australia are flushed with success to have released a world-first, enforceable Standard that will make it easier for consumers to tell at a glance what toilet hygiene-related products can go down the loo.

AS/NZS 5328:2021 Flushable products, released earlier this year, was a long time in the making and is thanks to the collaborative efforts of Water New Zealand and their Australian counterparts, the Water Services Association of Australia, together with water utilities, consumer groups, industry associations and manufacturers. 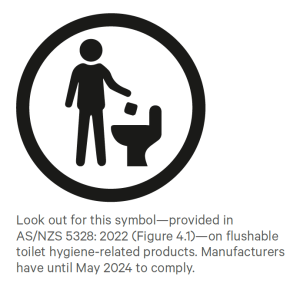 Look for the flush symbol

By May 2024, products that can be flushed will have a symbol on the packaging to show they’ve passed the criteria in the Standard and are safe for flushing.

Toilet paper packaging, liquids and soluble products won’t need to carry the symbol. Other products, such as wet wipes, will. If there’s no symbol on the packet, the product can’t be flushed and needs to go in the bin.

Several products that currently claim to be flushable may not pass the test. And, under the Fair Trading Act, companies making false claims about the flushability of their products could face fines of up to $600,000 per breach.

Products that might not pass the Standard’s flushability criteria include products containing plastic or that don’t disintegrate and that can’t pass easily through pipework and pumps.

The Standard is more about what can be flushed, rather than what can’t. It doesn’t require manufacturers of such products to include ‘do not flush’ wording or symbols on their packaging. However, work is underway for an ISO Standard for a nonflushable symbol.

For too many years, plumbers and drainlayers have been called to properties to deal with blockages caused by a clog of wet wipes, nappy liners, hand towels and other products that have got caught up on tree roots in old pipes or set like concrete in the sanitary drain.

Products of this kind are incompatible with our wastewater systems, which are designed to deal with the 3Ps = poo, pee and toilet paper, along with waste from bathing, laundry and kitchen waste activities.

Blockages cause nightmares for water utilities, too, with the associated risk of effluent spilling from wastewater infrastructure into our waterways, a danger to public health and the environment.

Master Plumbers has lobbied for several years for clearer consumer messaging around the use of wet wipes. “Whilst we welcome the release of the flushable products Standard, we believe it should be accompanied by a consumer awareness campaign,” says Master Plumbers CEO Greg Wallace. “Ratepayers across New Zealand are currently funding councils to deal with non-compliant products being put down the toilet.”

Wallace adds that Master Plumbers is developing signage that its members can display by WCs in commercial buildings to drive home the message that only the 3Ps should be flushed down the loo.

The advent of wet wipes has also coincided with the use of low-flow and reduced velocity plumbing fixtures and fittings. These water efficient fixtures and fittings can substantially reduce the flow of water down the drainage system, which means less water for the transfer of solids etc. Whilst toilet paper is subject to manufacturing standards of degradability within set periods of immersion, wet wipes have no such timeline.

Discharges from low-flow cisterns and pan combinations assume a mix of water, water and toilet paper to carry at least a metre as the toilet paper dissolves. If it doesn’t carry to the vertical stack, the next discharge will assist. Non-flushable wet wipes, however, don’t degrade and can snag on any sharp edges or angles in the pipe becoming a ‘catch point’ for further wipes.

Plumber and drainlayers get the call to unblock the blockages, which may be continual, with grumpy building owners pointing the finger at the installation, not the users. What can the plumber/drainlayer do to alleviate these situations?

Whilst not required by the Building Code, a CCTV inspection of a building project in, say, the last weeks before handover, is a good idea, advises Hydraulic Consulting Engineer Nick Fleckney.

“Some multi-storey projects can run for years,” he says. “The drainage system generally sits there unused with open pipes and potential ingress points where construction debris can get into the drainage system, eventually making its way to the ground floor slab pipework and blocking the drains… usually during opening week.

“A CCTV inspection will enable the plumber or drainlayer to identify any potential blockages, debris and/or pipework defects and remedy them before the building opens.

“Including a CCTV as part of your tender will go a long way towards preventing the dreaded late Friday afternoon callout and additional costs to the business trying to argue during the defects liability period that a blockage was caused by construction debris or by users flushing non-flushable wipes and rags down the system.”

A CCTV inspection may be embedded within the hydraulic specification on large commercial sites, so will be an expected part of the completion documentation at the end of the job.

“Some specifications may request a CCTV on completion of the below slab works, post concrete pour, to check for any potential concrete ingress and/or pipe deformations, especially on large pours where the pipe maybe suspended and encased within the concrete structural slab,” says Fleckney.

“In my view, it is best practice to include this on all jobs and the plumber or drainlayer should make it part and parcel of their service and price. Too often it is added near the end of the job as an expensive variation, where there can be arguments around who foots the bill.” Fleckney stresses that good QA documentation is absolutely essential.

“If you have good records, complete with photographs and CCTV, then if things do go wrong, you have the evidence to show the way the system is being used is at fault not your installation.”