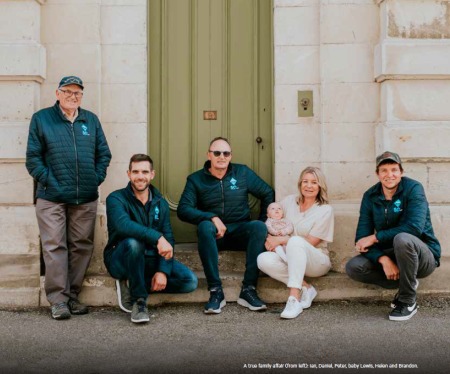 Three generations of the Ryder family are involved in Oamaru family business Hiflo Plumbing, which celebrated its 50th anniversary this year.

Giant signs marking Hiflo Plumbing’s 50th anniversary were installed at Oamaru’s Brydone Hotel in October as the backdrop for a special celebration attended by about 70 staff, past and present.

Company founder Ian Ryder, 83, was amazed to realise some of the apprentices he trained are now pensioners themselves.

A slide show of images from through the decades played during the evening, prompting plenty of reminiscences. Ian was chuffed to note that all the apprentices Hiflo trained have stayed in that profession, some now working in Australia and the North Island.

He is also proud of how the company has helped many young people forge careers, supporting them through the education side of their training as well as the practical requirements.

“Young ones are under a great deal of pressure these days,” he says. “It’s great to get young ones who can knuckle down.’’ 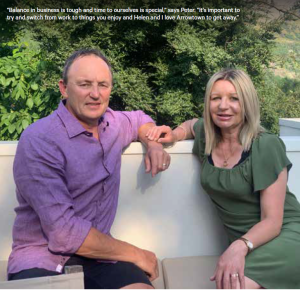 The business has become synonymous with service and family values since it was established by Ian and his wife Helen in 1972. Ian’s eldest son Peter did his own plumbing apprenticeship at the company and became managing director and co-owner with his wife, also called Helen, in 2004.

Peter and Helen even live next door to Ian in Oamaru. ‘‘We’re not an argumentative family,’’ says Peter with a smile.

The couple’s sons Brandon and Cameron also work at the company, along with their daughter Chloe’s husband, Daniel Warren.

Brandon, who is now a foreman and supervisor, was not sure at first what career to seek. But after working at Hiflo it became obvious to him, his father and grandfather that it was a natural fit. ‘‘He’s incredible,’’ says Peter. 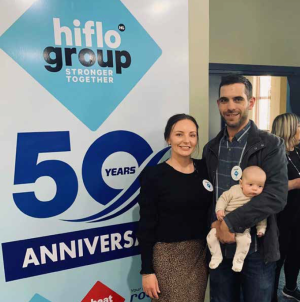 Perhaps Daniel and Chloe’s baby Lewis will represent the fourth generation of the business!

Younger brother Cameron studied business management, accounting and marketing at university before deciding he loved the outdoors so much he wanted to be a tradesman. He is now finishing his plumbing apprenticeship.

Peter’s son-in-law Daniel was a dairy farm manager who had wanted to be a plumber from a young age. He has become a project manager and manager of Hiflo’s retail division.

Unlike some families, where sons are expected to follow their fathers into business, the Ryders chose their careers independently. Both Ian and Peter believed their children should be free to pursue their own interests.

They are delighted, though, that there are now three generations involved, and can’t help but wonder if Chloe and Daniel’s baby son Lewis will become the fourth.

When Ian Ryder established the business, he was its sole plumber. He worked with picks, shovels and a small concrete mixer, and handled galvanised pipe, lead, soldering, cast iron and earthenware drainage.

Hiflo installed plumbing in the houses built at Twizel for hydroelectricity projects in the 1970s, moved onto Cromwell, then installed hotel bathrooms all around New Zealand in the 1980s.

It set up bases at Ōtaki to cater for the Wellington market and at Huntly for Auckland. The following year, Ian headed to Australia for stints in Bougainville and Port Moresby on prefabricated housing projects with de Geest.

Back in Oamaru, Hiflo took on a Rockgas franchise in 1999. It eventually acquired four franchises, then recently sold the largest, the North Canterbury operation. It still has franchises in Oamaru, Mackenzie, and Mid Canterbury.

Ian stepped down when he reached the age of 80, having been semi-retired for a while before then. However, he always turned up when there was a smoko shout, Peter says. 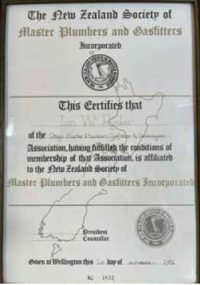 Hiflo Plumbing became a member of Master Plumbers in 1981.

The company moved to its current site at the beginning of 2004, when Peter and Helen took over. ‘‘Dad bought the building and I bought the business,’’ says Peter.

What began as mainly installing fires evolved into retailing and is now Hiflo Heat & Home. It stocks a variety of wood, pellet, gas, and outdoor fires, spa pools, and Weber barbecues. As the business grew, staff numbers did too. They peaked at 42 before the Rockgas sale and now sit at 36, including seven apprentices.

Ian says when he entered the workforce in 1954, he had no idea it would lead to today’s family enterprise. ‘‘I’m looking forward to the boys coming into the business over the next phase, as I get time to play golf!” he says.

This story is based on an article that first appeared in The Oamaru Mail.