About » News » Real Lives - Check this out

Real Lives - Check this out

A diagnosis of bowel cancer for 45-year-old plumbing business owner Grayson Allen came as a complete shock. We asked him about its impact, and what he has learned from the experience. 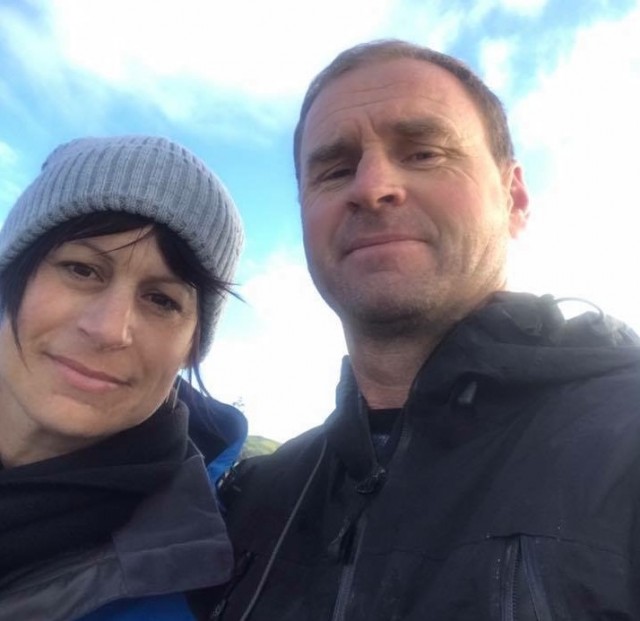 Above: Grayson and Cherie Allen

Q: How did you first know something was up?

A: I just got the feeling something wasn’t right. There was nothing obvious, but I had an uncomfortable sensation in my gut and was knackered. I’d been working huge hours and was stressed, so I reckoned maybe I’d picked up a virus. I’d always been pretty fit—eating well, not drinking too much, trail running, cricket, tramping—so I thought that would keep me ticking. I’d also been for a full medical check in February that year [2017] and had been given the rubber stamp.

In late May I got the flu like never before. My head felt like it had been hit by a hammer and I had a hacking cough. After a week or two, I went to the GP and was told it was a particularly nasty strain of flu, to take some Panadol and wait it out. But it just got worse, to the point that I was vomiting after everything I ate. In July, I went back to the GP, who again assured me I had typical flu symptoms.

Q: What was the turning point in the diagnosis?

A: My good mate Bernie, who I run with, is a colorectal surgeon. My wife Cherie rang him after my doctor’s appointment to say she felt something wasn’t right. I was still working but I’d lost nearly 10kg in those three or four weeks. Bernie booked me in for a colonoscopy five days later through my medical insurance and told me to go to A&E the next day to get a CT scan and other tests done at the hospital. That was on a Friday. He rang me on the Monday morning to tell me I had bowel cancer and that I was booked in for an operation the next day.

I had laproscopic surgery to have 200mm of sigmoid bowel removed and spent the next seven days recovering in hospital. The cancer was at late Stage 3 and had spread to my lymph nodes. I was lucky I had such quick intervention. If it had tracked to my liver or lungs, there wouldn’t have been much they could do. As it was, once I’d recovered from the surgery, I was given the option of chemotherapy.

Without chemo, the stats were a 60% chance of the cancer returning in the next two years. With it, the stats were 30-40%. For me, it was a no-brainer—though it wasn’t pretty. They felt I was young and fit enough to handle the maximum dose and it took eight months, with a two-week cycle of infusions and drugs, which really knocked me around. I completed the treatment this April. 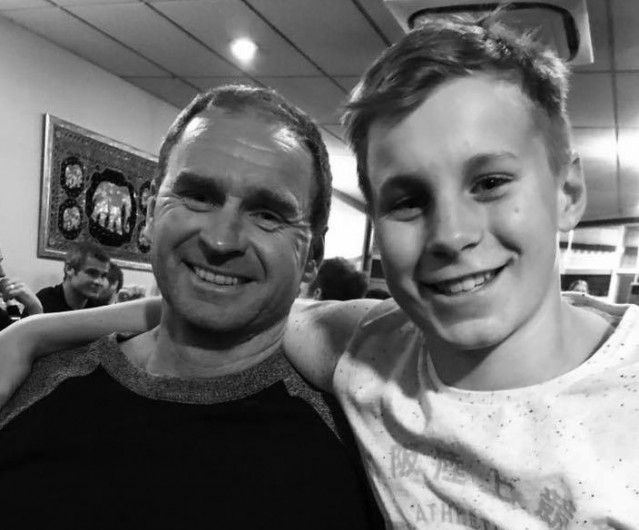 Q: How did you manage to keep your business running?

A: It was a godsend I had good medical insurance, which meant I got treated quickly and was able to stay in a private hospital with excellent after care. In reality, it was down to proper business planning. I had been given good advice that if you’re running a business and employing staff, you need medical, trauma and income protection policies. If I didn’t have those in place, I wouldn’t have a business today.

I have key man insurance, which allows for a business fund to keep the business operating. The camaraderie of my local Master Plumbers was fantastic, with about six or seven core guys coming over to ask what they could do to help—whether finishing jobs, taking over jobs, pricing jobs or supervising my apprentice. My admin staff are part of three businesses— Peak Plumbing & Gas, Peak Maintenance and Kyle Symons Electricians—so I’m responsible for eight staff in total. If I didn’t have cover, no one would be paying my wage or theirs.

It’s easy when you’re busy to say you haven’t got time to think about insurance. When I set up a new business in 2006, I made the decision to ensure I was covered. I had a two-hour meeting with the insurance advisor and did my homework. Once the insurance is in place it’s just a monthly payment. You’d be foolish if you didn’t work that into your hourly rate.

Q: How did the diagnosis affect your family?

A: It was a shock to my two brothers, as we had no immediate family history of cancer. They were advised to have a colonoscopy and my older brother discovered he had a pre-cancerous tumour in the same part of his bowel, which was operated on a week later. Our 14-year-old twin sons will also need regular colonoscopies. If you have a genetic marker for cancer, you are at risk no matter how fit and healthy you are.

There’s a huge flow-on effect for the whole family. It knocked my confidence, as I realised I was no longer bullet-proof. Our boys reacted differently. One bottled up his emotions and the other became quite protective and clingy. He has since got quite involved with Canteen, which supports teenagers affected by cancer in their lives. Each has had to process it in his own way.

Cherie has borne the brunt of it and has always been there for me—even when I needed help putting on my own jocks and socks. It has caused a lot of physical and mental stress, but my family and friends have been fantastic. 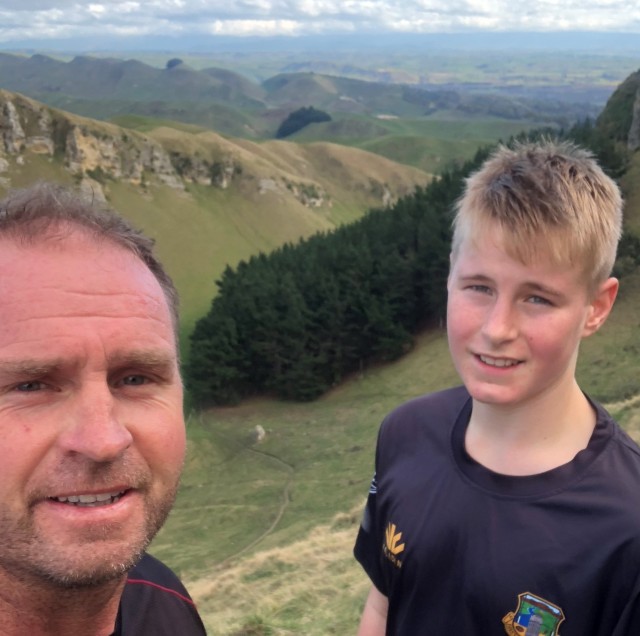 Q: Where are you at now?

A: This July was a year since the initial diagnosis. I completed the chemo in April, but it left me with blistered feet, balance issues and numbness in my arm, so I was in no state to be climbing ladders or handling tools.

With income protection, I was able to do no work for three to six months.

For the past four or five months I’ve been doing about two hours’ admin and supervisory work a day—and I’ll slowly up that. My income top-up protection lasts five years if needed.

I continue to have regular blood tests and checks and it will take two years with a clean bill of health before I’m considered in full remission.

Q: What do you want others to take out from your experience?

I used to pride myself on not going to the doctor. At 36, I started going every two years for a medical, including a skin check. As blokes, we need to drop the macho act. I urge everyone to get a full benchmark check at 40: bowel, prostate, hepatitis, skin check, everything. After that, it’s a good idea to get a prostate check every two years. Prevention is better than cure. And if something’s not right, don’t ignore it. You maintain your ute and your power tools, so why wouldn’t you do the same for yourself? Regular maintenance is key.

Even young people are not immune. Testicular cancer is the biggest killer of males in their teens and 20s. Our local urologist told me that he sees a case of a young man with testicular cancer every month. Learn how to give yourself a regular check.

Also, be aware that ACC doesn’t cover illness or chronic conditions, such as arthritis or a bad back. It only covers workplace accidents.

I believe stress was a big factor in my illness and it has come at a cost to my wife and kids. My biggest challenge as a bloke is to learn new ways to communicate when I’m feeling stressed, rather than bottling it up or getting grumpy.

Plumbers, gasfitters and engineers often do huge hours on major jobs and I was regularly working 12 or 13-hour days to meet contract deadlines. As a business owner, take the time to ensure you have efficient processes and systems in place—and also know how to say no to some jobs. 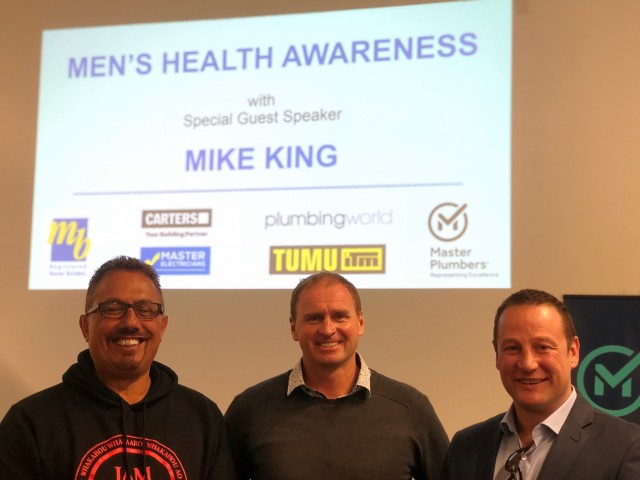 Above: Mike King (left) with Grayson Allen and Scott Taylor of Master Builders  at a men's health awareness evening in Havelock North.

This blog has been adapted from an article in NZ Plumber magazine, Aug/Sep 2018 issue.