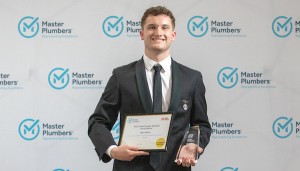 This national award has been presented since 1948 to an outstanding New Zealand apprentice plumber, gasfitter or drainlayer, and comes with a $500 cash prize and $2,500 Career Development Scholarship from The Skills Organisation.

For Ryan, this award is the icing on the cake, having also received a Merit Award of Excellence from the Plumbers, Gasfitters and Drainlayers Board in 2021 for attaining the highest mark in New Zealand for the previous year’s Certifying Plumber registration exam.

In fact, with just over a year to go until he completes his apprenticeship and gains his Level 4 National Certificates, Ryan has already sat and passed his Tradesman and Certifying registration exams in all three trades of plumbing, gasfitting and drainlaying.

He’s not just book smart, either. One of the senior plumbers at Hutt Gas and Plumbing says Ryan’s workmanship and attention to detail is above and beyond what would normally be expected from an apprentice, and he is always wanting to learn more and extend himself.

Popular with the team and their customers alike, Ryan is always willing to put his hand up for after-hours call outs or to cover for his colleagues if needed.

At a time when the plumbing industry is desperately short of qualified workers, apprentices are a vital way to plug the skills gap and bring new blood into the industry.

With his trade exams and this top national award under his belt, Ryan is well on course to be a future leader.